To boil maple tree sap until it thickens into maple syrup 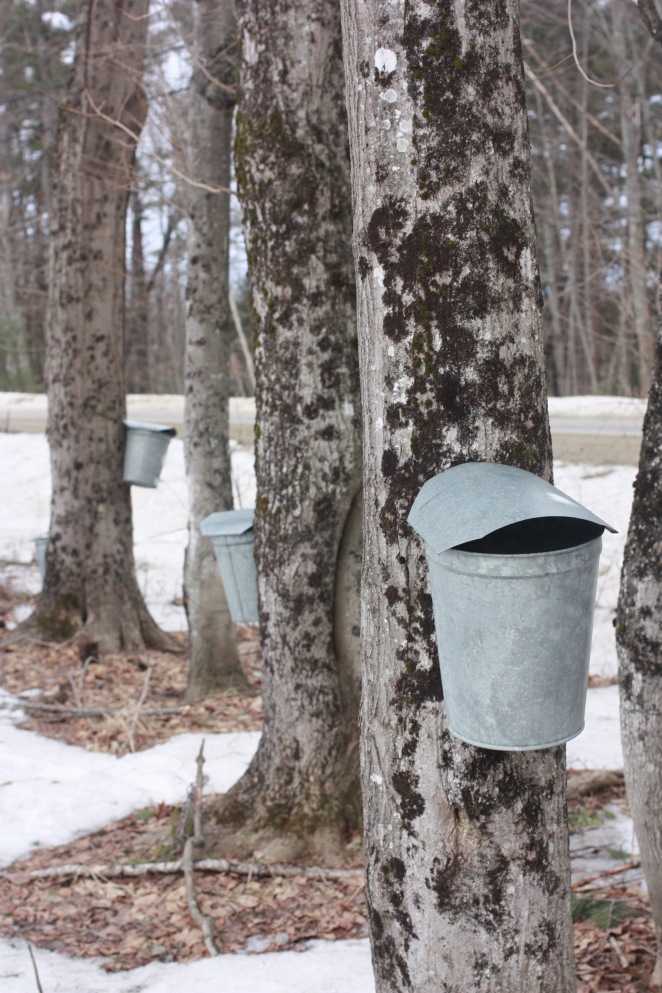 The steam billowing out of the sugar house confirms that I’ve come at the right time to Goranson Farm. I’m led into the side door by canine residents Kennebec and Lila. I open the door and am immediately wrapped in warm, sweet smelling steam. Having just come from my chilly office, the feeling is like walking into a maple flavored steam bath. I am immediately revived. I find Rob Johanson, co-owner of Goranson Farm in Dresden, standing before a roughly 12 foot x 12 foot stainless steel evaporator. A timer goes off and Goran, Rob’s younger son, gets up from his stool and walks over to the opposite end of the evaporator to fill it with wood.

One end of the evaporator is connected to the wall and the sap tank outside. Goranson Farm collects sap from 1600 tap lines and 400 buckets. The other end of the evaporator has a powerful wood stove on the bottom attached to an open basin. This basin is separated into four vertical and one horizontal sections of boiling, steaming maple sap. As Goran finishes throwing logs into the woodstove, Rob walks over to the open basin where the sap is boiling, takes a glass of butter, dips a wooden stick into it, and slips it into each of the five sections of sap. He explains that boiling sap tends to foam, and the butter keeps the foam down.

Rob has been making maple syrup here for nearly 40 years. From the outside, it looks like an enviable task. Drop everything you are doing, hang out in a warm steamy room in March, and watch sap boil. Yet I’m surprised by how busy the sap house is. The timer for filling up the woodstove goes off every seven minutes, and in between Rob and Goran are filling bottles, organizing filters, and checking temperatures. Rob’s eldest son, Carl, pops in and out to coordinate workers who are pulling sap buckets from around the farm. There is a low-level hum of quiet activity. The timer goes off again and Rob says, “it’s a quick seven minutes.”

On the front of the evaporator, two pipes with levers reach out to buckets waiting for syrup. Above these is a temperature gauge. Rob explains that the ideal temperature for reaching the desired thickness and color of syrup depends on the day, but that yesterday it was about 222 degrees Fahrenheit. Once the sap has boiled sufficiently, Rob fills the buckets, tests the temperature and density, and figures whether he needs to raise or lower the temperature to achieve the correct consistency. Once he is happy, he sends the buckets over to Goran, where they are warmed up again, put through a filter, and bottled. 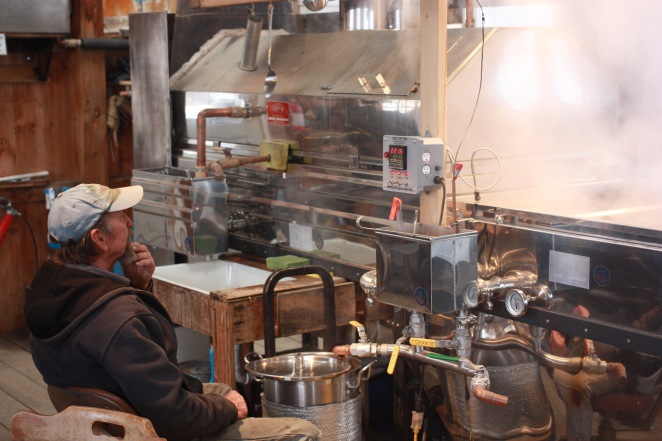 Earlier that week, as we sat around their kitchen table, Rob’s wife Jan, co-owner of Goranson Farm, mentioned that her birthday is February 21st. When they first met, she says, all she wanted for her birthday was to begin tapping, but the trees were never ready. Maybe they’d tap one just to make her happy, but the real sugaring didn’t take place until mid-March. Mike Lynch, who also sugars on the farm, says he used to take a winter vacation down South before sugaring season. He’d usually come back by March 1st, just in case, but sugaring never started that early. Then they began to notice that they were tapping earlier in March. Soon they began to expect to be ready the third week in February, and now they’re pushing it up to the first week in February. Though there have been many changes on the farm over the years this, they say, is the most recognizable shift.

There are a handful of trees that produce sweet sap: birch, walnut, and maple, but maple is the sweetest. The processes within the tree that lead to the sap running are influenced by weather patterns outside the tree. Sugar is critical for the growth of trees. Most of the tree’s sugar is produced by leaves in the summer, then stored as starch mostly in the trunk and the roots. In the winter, the tree goes dormant and the sap freezes. As snow piles up outside the tree, it wraps itself around the trunk and roots, helping the tree rest. It is the freeze-thaw cycle of early spring that wakes the giant trees, the abrupt back and forth between warm days, in the 40s and 50s, and cool nights, in the 20s. When the temperature drops at night and warms during the day it stimulates the tree to wake up. Sap begins moving throughout the tree preparing to produce buds. The sap flow also happens in the fall, in reverse, as the tree prepares to go into dormancy. But most producers don’t bother tapping then, as the amount of sap is much lower.

In 2001, the earliest sap flow recorded in New England was in Vermont, on February 22nd. In Maine, the earliest sap flow was on March 19th. Records from the USDA indicate that in the last 17 years initial sap flow dates have changed throughout New England. By 2017, the earliest sap flow recorded was January 1st. These shifts in the timing of the freeze-thaw cycle could impact the tree’s ability to produce sap in a number of ways. Kathryn Hopkins, of the University of Maine Cooperative Extension, says that “in general the weather conditions to create sap flow have been beginning earlier and earlier; some climate folks think that fall period of going into dormancy and spring coming out of dormancy, those two phenomena are going to get closer and closer together in time, the trees are going to go dormant later in the year, come out of it earlier. And what that means, nobody really knows. The observation is that these time frames are getting closer together. Will there be one heavy sap flow that starts soon after they go dormant?” Another way the shifting freeze-thaw cycle could influence sap production is through warmer, less predictable spring temperatures. Hopkins notes that “as the weather becomes more chaotic, if spring comes ‘early’ and the warm period sustains long enough that the trees leaf out, you [could] get a cold snap, kill the leaves and force the tree to expend its energy to put out a whole new flush of growth.” 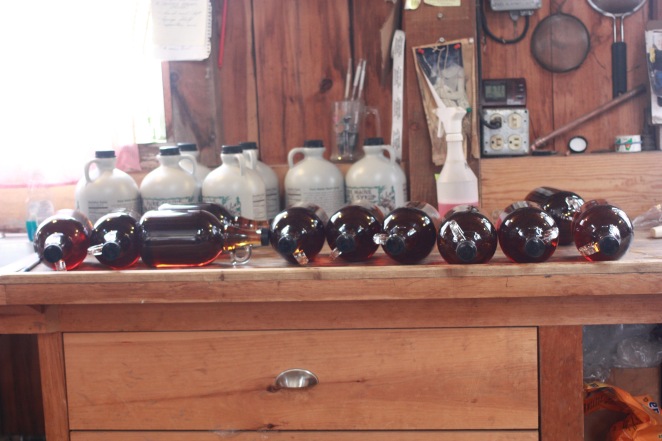 Warming temperatures are shaping maple production at the forest level as well. A new article in the Journal of Applied Ecology by University of Maine and Purdue scientists notes that due to warmer temperatures and precipitation changes, beech trees are taking over the Northeastern forest. Because beech trees tend to shade out other competitors, maple trees are not regenerating as readily. So maple trees will eventually migrate north, and beech, oak, and other warmer weather species will proliferate. This has implications not only for maple syrup and the forest ecosystem, but also for the timber industry. Hopkins says that “Potentially, with a long- lived species like maple, the current trees of tappable size will continue to exist and have sap flow, so the industry will continue. But as those trees age and die, if they are not capable of competing in the forest, then eventually in 100 years, you could have very limited resource.” She also notes that the rise in the number of extreme weather events and their intensity is impacting maple syrup production. Big storm events characterized by higher winds, sharper warm spikes, and more intense precipitation used to be unusual here. But as these kinds of weather events become more common because of the warming climate, the risk of damage in the sugar bush also goes up. Just the other day, she says, she was talking to a producer who lost 160 trees in a major storm in October. “If you’re in an area that’s prone to tornadoes—Maine never has been, but there have been micro-bursts in the last few years—those kinds of events that seem to be connected with a warming climate can cause a lot of damage.”

Back at the sugar house, Goran is holding a small maple leaf filled with the latest batch up to the window, considering its color. Rob gives me a sample of the syrup, still hot from the bucket. It tastes brighter than what I’m used to, perhaps because it is so fresh. The hot syrup burns my throat slightly as I swallow it, but I immediately take another gulp because it is so delicious. Rob says his favorite way to have it is dipped with pickles. I take another sip, slower this time, enjoying the sweetness, at least for now. 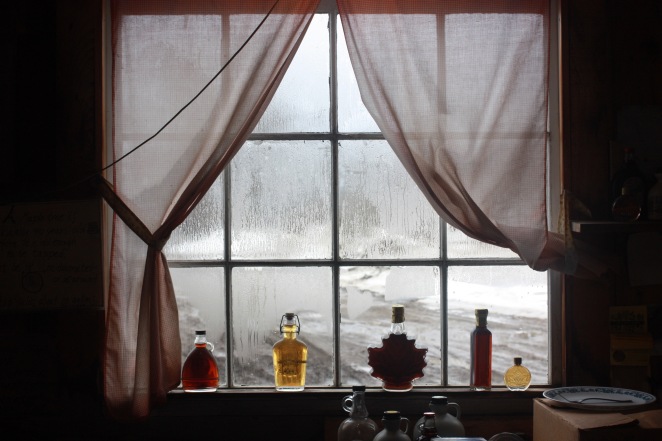